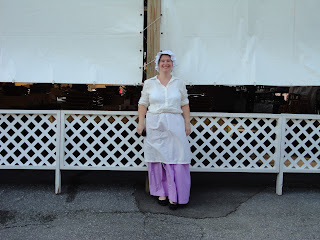 Oddly enough the news this morning said that the third heat wave will started in the Lehigh Valley yesterday. I think both participants and guest to the festival may disagree, we think it started last Saturday. But I have to admit I have had an awesome spot. The breeze comes in (sometimes enough to blow over displays) and regardless of the temperature, as long as the air moves, it is pretty comfortable for me.

My feet are finally starting to hurt. I wanted to really try and stand the whole show, I haven't been in my chair once. Standing is supposed to enhance sales so I keep setting my goal to stand all day. I made it through the five days at Mayfair, but that was on grass so I had more padding under my feet. I have made it the six days so far, but I don't now if I will be able to make it today, I may have to sit during the slow times.

I also am bummed, I was hoping that the show would help me take off some weight, the hot days, the low amounts of food, and the exercise of standing have only combined to pack on about two pounds. I think it is stopping for dinner each night. I eat a huge, rich meal after not eating much all day because of the heat, and then go to bed just two hours later. I try not to eat huge, but once I get into the airconditioning my stomach grumbles and I just gotta eat. So next week it looks like it is back to my food diary, and the bike or running every day. Probably be the bike for a few weeks wile teh heat passes and my feet stop hurting.

So the show went well yesterday, certainly better than the same day last year. Lat year today, the Friday was my worst day, I wonder how that will translate to this year. It is funny how everyone is so preoccupied with comparing year to year, but where the holiday falls, the weather, and economy, I think it is almost impossible to compare year to year on a daily basis, you have to just look at the whole thing when it is over.

OK got to go, I have a bunch of orders to fill. (that is always cool to say!), and then some inventory to pack. I hope to have a few minutes to put my feet on my foot massager. Ah, speaking of massage, I have one scheduled for Wednesday after that show, I can't wait!
Posted by Unknown at 5:51 AM