I am sick and tired of my web site being always out of date. It is just about March and I have been working on it on and off for two months now, and every time I think I make progress, I need to make changes. Now I have a second site to upload items onto and I can't do that right until my own web site is ready.

So today I am strapping myself to the computer and working on both pages. I want to get them done today, but honestly, that probably won't happen.. but I think I can get close.

Off to put away the laundry, then grab some tea, and start the first page....
Posted by Unknown at 6:32 AM No comments: Links to this post

Now's the time to shovel...

All that pretty snow has added up to about a foot, and with the drifts it was deeper than that in some places. I shoveled for about and hour, just digging out the front and back steps, the garbage cans, and some of the driveway. Dad is out now with the snow blower getting the sidewalks done, paths widened, and all the grunt work done. The sun is out and the snow is already melting, getting wet, and heavy.

But I guess I don't have to do any additional exercise today, an hour of shoveling is quite a work out.

Also got some more samplers made. Ran out of labels with 13 to go. So I got those ordered. Getting some supplies for shampoo bars has gotten to be a pain, with my old supplier not carrying what I need any more, it has been lots of time trying to find someplace new to deal with.

Today's fragrance was Ocean Tides. Almost done for the day, would have made more, but am tired from the snow removal. Will spend the rest of the day on the computer trying to get some updates done. And I think maybe a nap... zzzzzzz.....
Posted by Unknown at 12:24 PM No comments: Links to this post

It is a Snow Day!

Now there is no reason why I can't go into the workshop today and make loads of soap, but something about the snow makes me not want to It is so beautiful to watch fall as I sip some tea and knit. The street is so quiet, hardly a car goes by. The snow seems to engulf almost all sound, even the nearby train is much more quiet than usual.

I have been up for about and hour and a half now and I just don't want to get out of my pajamas. So I think I will make an executive decision and take a Snow Day. I don't plan on going anywhere, or doing anything other than knitting, watching the Olympics and shoveling later.

C is gone this weekend, so I will work in the shop during those days alone. I will try and motivate a little later and get some web site work done, maybe do some yoga, and continue to practice my Spanish lessons. But for right now I am surfing the web, playing video games, laughing at my crazy cats, and watching the snow fall, silently.
Posted by Unknown at 8:00 AM No comments: Links to this post

Where does the time go?? 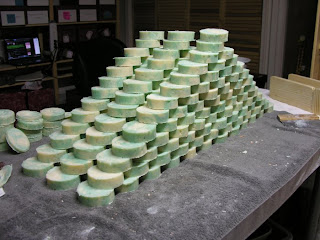 Another week has gone by in the blink of an eye. I am really pushing hard right now and want to get a ton of stuff done. Every week I have been meeting with B and we set goals for the next seven days. Seven goals, seven days. It is a pretty mad push to get some of them done. But I find it very rewarding. I am father along than I have been in any past year. I have to watch my spending because I am running short on cash. I am trying my hardest not to use a credit card at all, and that is sort of tough. I am thinking of putting my student loans on hold for a few months until I start doing craft shows again. It is on my list of things to do to look into that mess.

Anyway, enough with the woe-is-me. I am having a great spring and I am getting lots of orders and I just need to be careful and all will be fine. It always is.

I made new soaps, just a few more to go. I made Blue Lagoon which I think is my masterpiece for the season. It is so pretty colored and it smells so nice too. Also made Pepperberry. It is spicy and strong and unlike any of my other scents.

This week is Calendula and Bamboo, and then I just need to wait for one more supply order to come in and I can make everything else I need for the year.

I got out a special order this past week as well: patchouli bath fizzys. So if you ever see something you like but want a different fragrance, just let me know. I most likely can make it for you.

This week I hope to finish up my lotion bars, but I think I am waiting on a fragrance delivery, have to check on that. I also want to start making bath salts. I don't have many to make so as long as I have everything I need I should be able to start that too.

Gonna leave you with a cool pic: a years worth of Blue Lagoon:
Posted by Unknown at 9:47 AM No comments: Links to this post Some of the stunning views from vacation.. hope Spring gets here soon!
Posted by Unknown at 6:43 AM 1 comment: Links to this post I missed this....
Posted by Unknown at 6:42 AM No comments: Links to this post

So while most everyone I know was digging out of snow, I was relaxing at the beach in Puerto Rico. I have to admit, I really did nothing. C and I celebrated our anniversary by staying at a resort in Fajardo for the first weekend. It was stunning. I'll post a link to flickr or some photos in a bit. I still have to unpack and find the camera.

The rest of the week C had to work, so while he was slaving to pay the bills, I was at the pool, at Starbucks, going for a walk, taking a nap, knitting by the ocean, hanging in the hammocks, and generally doing everything I could that resulted in a few extra pounds on my frame by weeks end.

Dad held down the fort and got almost all the orders shipped out (still a few special ones to deal with), and got lip balms labeled and shrink wrapped for me as well. He also dug out the house, the cars, the sidewalks, and the driveway from about 17" of snow (I'll post a few pics of that soon too).

So now I am back and trying to catch up. My flight landed about 3 hours later than expected yesterday, so I didn't get anything done yesterday at all. First thing I started to make soap and unpack the half dozen boxes of supplies that arrived while I was gone. I got bills paid, and now am writing this. Next I have to wade through my hundred or so emails to make a list of things that need to be dealt with ASAP, and wade through my dozen or so voice mails to do the same thing.

Later, in between stirring the soap I'll unpack, do laundry, and generally make up a huge list of things to do around here and start at the list. I am amazed by how much can pile up in just 10 days, and 4 of them were weekend days!

Ok, time to stir.. making a new scent today- Luffa Scrub and LOVE it. Very light, but pretty awesome.
Posted by Unknown at 11:11 AM No comments: Links to this post