So I planned on blogging each of these days individually but life got in the way. Just at the end of Day 8 a storm rolled through. I was very lucky, my neighbor Paul rolled his van in front of the doorway and blocked about 90% of the rain and wind. It would have been pretty ugly if he hadn't of thought of that. That is one one problem with my building, there is no way to close off an entrance. Everyone came together to help me get my tarps on and secure them with clamps and then I moved as much as I could to the dry side of the booth and hung on trying to keep everything covered as the storm blew through.

Once everything cleared I just left everything as it was and headed home. Guess what? No power. (hence no blog) and the next morning? Still no power.

So I headed out early back to the show to clean up the mess from the day before. It really wasn't that bad at all. I even had time for breakfast. Around 5 pm I received a text that the power was back, just about 24 hours without it.

I finished up the Festival on a really strong note. My sales were up from the year before by a hair's breath. Load out was super easy too. This morning we emptied the vans and I put away inventory and started washing all the table covers and displays. I am also trying to catch up on housework and the garden, both of which have been neglected. It is going to take me a few days to dig out from all this, but I am just attacking one thing at a time and writing down anything that crosses my mind and needs to be done later. 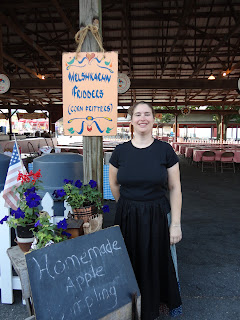 Sadly the money is already spent, checks went out this morning to pay for show fees later in the year, and supplies bought on credit earlier in the year. It is gone before I can be tempted to spend it on something frivolous. My next big show is in two weeks, the WXPN festival and in between we have over a dozen kinds of soap that we need to make to keep up inventory. I think it is going to be a very busy summer. :)